Short days and cold nights make it an ideal time to snuggle up with a book, and a mug of hot chocolate. My crystal ball tells me there are some great new books heading for publication in 2019. How do I know? Well, I was proud to act as a beta reader for some authors I admire and I’ll give details in due course. Meanwhile, I thought I’d share information about the books I’m most looking forward to reading in January.

Before I do this, I’ll mention  my first novel, Kritsotopoula, Girl of Kritsa has a revised cover. Thanks to advice from Nikos, my favourite bookseller at Nikitakis Gift Shop in the centre of Kritsa, the fonts are now easier to read. I hope some customers in Aristidis Cafe across the road spot it while enjoying their refreshments. 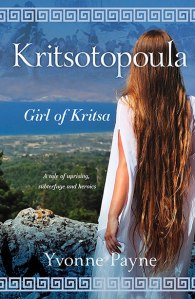 Rodanthe, the feisty daughter of Kritsa’s pappas (priest), spent her childhood longing for her father’s approval without appreciating his efforts to keep her safe under Ottoman oppression.

Years later, the ruling Pasha orders Rodanthe’s kidnap intent on making her his wife. Determined not to yield, Rodanthe tricks the Pasha and then flees to the mountains dressed as a young man.

After joining rebels as Spanomanolis (Beardless Manolis), she draws on her unusual experiences and rare education to maintain her disguise throughout daring raids.

The crisper Greek meander design matches the one on  Rodanthe’s Gift to make the link between them more obvious.

Four mourners stand over the shrouded body of the exceptional female rebel, Rodanthe. Each suffers the loss of a daughter, friend, lost love or valued ally. Her injured papa, Mathaios, kneels at her graveside, begging forgiveness for his sinful decision to keep her baptismal gold a secret. He later bequests the remaining coins to her young friend Petros. A gift with consequences beyond imagination. Kostas loved Rodanthe, but only realised this truth moments before her death. Now dependent on others for his mobility, he resolves to play a significant role in the continuing conflict.When rebel leader Captain Kazanis leaves the graveyard, his focus is on leading the local fight for freedom. However, betrayal and grief take him far beyond his beloved Crete.

Right, that’s my update and here are the books I’m looking forward to reading:

I loved Kathryn’s The Embroiderer and I’ve high expectations of The Carpet Weaver of Usak.

Set amidst the timeless landscape and remote villages of Anatolia, The Carpet Weaver of Uşak is the haunting and unforgettable story of a deep friendship between two women, one Greek Orthodox, the other a Muslim Turk: a friendship that transcends an atmosphere of mistrust, fear and ultimate collapse, long after the wars end.

Marjory McGinn’s travel memoirs are first class and this one, A Saint for the Summer is her first novel.

Journalist Bronte McKnight visits a hillside village in the beautiful Mani region of Greece to help her estranged expat father Angus with a medical problem. She soon discovers that Angus, has lured her to solve a mystery from the Second World War, when a family member disappeared.

Phaedra is born a healthy girl and followed eighteen months later by an equally healthy boy. Although there is bad feeling between Eleni and Maria, their enmity comes to a head when Maria’s daughter is found to have leprosy and transported to Spinalonga, giving rise to tragic occurrences.

Effrosyni Moschoudi has created her own genre of spooky Greek reads. I have read the first two books in The Lady Of The Pier Trilogy and I’m looking forward to book three, The Storm.

When Sofia falls in love, a mourning spirit haunts her. The Storm is the concluding part of the trilogy that merges the stories of Sofia and Laura into one.

These will keep me busy for a while, and if I enjoy a book I will of course add a review on Amazon. It only takes a few minutes and I know only too well how important it is for an author to have feedback.

Help me decide what to read next, what can you recommend?