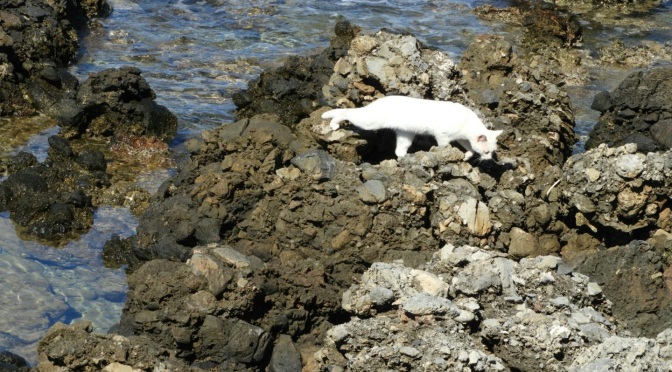 Whenever we are in Crete, Sisi is a must visit place. The village of Sisi, or Sissi, depending on what map you use, is a jewel on the north coast between Malia and Milatos. A tear shaped inlet forms a natural harbour, supplemented by a seawall.

With so many different tavernas and bars we always find it difficult to decide between lunch overlooking the pretty inlet or the sea. The ‘seaside’ tavernas have decked dining areas over the rocky coast where we enjoy spotting kingfishers busy hunting fish in rock pools. We also watch cats walk across these rocks to get to and from whichever taverna’s customers are most likely to provide scraps. However, this was the first time we’d seen a cat fishing! 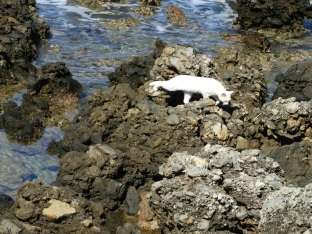 Until summer 2016, one of the boats bringing an influx of customers from Hersonnisos to Sisi, was the pirate ship, Black Rose. Although other boats still arrive this one has now diverted to Malia. It always made a loud entry to strains of  Pirates of the Caribbean, so I guess some people will be pleased she moved on.

Among Sisi supermarkets and gift shops it is worth mentioning Dia Xeiros right in the centre of the village. Here you’ll find a lovely range of handmade products and enjoy a warm welcome from Kalliopi and her daughter, Agapi.

Sharp eyed readers may wonder why Kalliope is holding a copy of Kritsotopoula, Girl of Kritsa… it is because unprecedented female shipping owner, Bouboulina from Spetses, braves a raging storm to deliver arms to Sisi rebels. Here is an excerpt…

Bouboulina’s angry face matched the tempest, and her twisted, lank hair snaked out behind her like a mythical Fury as the wind tore away her screamed instructions. Although able to pull an oar as strongly as the eight exhausted men flanking each side of the open vessel, Bouboulina was wrestling with the tiller. Valiantly straining against furious breakers and peering through grey spray, she wasn’t confident that she’d actually seen the tiny harbour entrance.

With all her weight against the resistant helm, she gambled on the next surge to shoot her through the gap. Certain there was no second chance, Bouboulina just closed her eyes and trusted God. The difference was immediate. Oars smoothly pushed tons of water, the rudder responded, and she had control. Without constant drenching from beating waves, the oarsmen felt the heat of the sun and slumped forward, spent. Although she shared their fatigue, Bouboulina yelled, ‘Don’t slack. Men muster for us. I can smell their raki! Together now, pull.’

As soon as she judged it safe, Bouboulina leapt to the quayside, passed her bow rope to Spiros, then ran to catch her cacique’s stern rope. Even before the vessel was secure, the deck hatch opened and her crew formed a chain to pass out wooden crates streaming water. As the first crate hit the wharf, the Sisi men bowled kegs towards the boat where Bouboulina had orchestrated two lines; the first swung crates to shore, and the other lifted kegs on deck. Within minutes, women appeared carrying baskets of food. Gulping raki, Bouboulina said, ‘Panagia Mou, I never thought to taste this holy water again. What a storm!’

Poppi poured her another. ‘We certainly came out in a sweat of fear for you, and now this fickle wind’s dropping.’

Spiros overheard the women, and commented, ‘The August meltimi doesn’t usually blow this late in the day.’

Although Bouboulina nodded, she said, ‘Tell Kazanis to identify another harbour, I’ll not risk this one again. Those waves nearly beat our oars. Only God knows how we missed being smashed on those rocks.’

‘Well I thank the Panagia,’ said Poppi. ‘If it weren’t for her feast our boats would have put out, and I shudder to think what would have happened. Excuse me, I’ll fetch more food.’

As Poppi turned, she faced the far ridge. ‘Oh Panagia Mou, the hills are aflame!’ A raging inferno was consuming the pine forest west of Sellenari to blanket the mountain with black smoke. At first glance, Spiros thought there was a second seat of fire, then, as his stomach gave a sickening lurch, he realised the nearer smoke line was dust from charging horses.

Bouboulina intrigued me, and even though I’d love to see a novel based on her life, it won’t be from me as I’ve decided to focus my writing in Crete. However, she will make a cameo appearance in the sequel, Rodanthe’s Gift, due later this year.

Meanwhile, what Greek/Cretan figure would you write about, or hope someone else writes about?