Our final day on mainland Greece was on the south-western slopes of Mount Parnassus, Greece, for a tour of Delphi, the centre of the earth. What? You didn’t know? 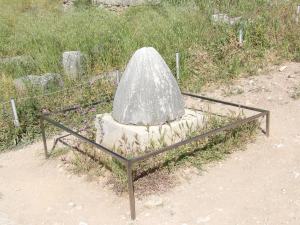 Well, here’s the proof. The God, Zeus released two eagles. one each side of the world. They met at the centre of the earth in Delphi where there just happened to be an odd metallic rock; the navel of the world. This rock denotes the place of the original that was revered and wrapped in ornate bindings. An ancient copy is in Delphi’s museum. My uneducated guess is the rock was a meteorite.

A benefit from staying overnight in the ‘new’ village of Delphi was the opportunity to make an early start before temperatures and visitor numbers soared. Unlike most people we decided to tour the site before the museum.

The paths around the archaeological site are well-defined, with information boards to explain what you’re seeing.  The stadium, second in importance to Olympia looked great with lush grass.  In fact our early May visit provided a bonus, as the site was still very green with vibrant wild flowers. Soon it would become tinder dry and we appreciated the huge investment in fire defences with sprinkler systems and hydrants among the trees and on the mountainside above the site. Fingers crossed they don’t get tested!

There is far more to say about Delphi than I can put in a single blog, hence this link to a good overview at Wikipedia .

Apart from the fact there was a huge queue to enter the museum we were pleased to leave it until last, the air conditioning was a treat.

No wonder Delphi is a UNESCO World Heritage Site, it is a ‘must see’ place if you love Greece.

We started our tour being wowed by the amazing weather carved rocks at Meteora and ended in awe of the skills of ancient architects.

The road towards Athens and our car ferry back to Crete had some farewell gifts for us. The snow topped mountains looked fabulous under a clear blue sky and our late lunch stop at Arahova, a ski resort was a delight.

I’d love to know what unexpected gems you’ve found while holidaying in Greece….