Many museums and monuments in Greece close on a Monday, a fact I’d totally overlooked when planning my Missolonghi research day. Not only that, it was May Day, a public holiday. My husband, Alan tried to cheer me up suggesting we go to the museum anyway, perhaps there’d be useful information outside.

To my amazement the door was open and my hopes rose when a man stepped forward proffering a guidebook for €8. With my camera around my neck he had me sussed. ‘Sorry, no photographs!’

I couldn’t help telling him I was excited to visit the museum as I’m writing a book.

‘Yes, but especially the final siege.’

He stared for a moment, digesting my answer. Then his demeanour changed. ‘Really? You know about the siege? Come, bring your camera. I’ll show you.’ 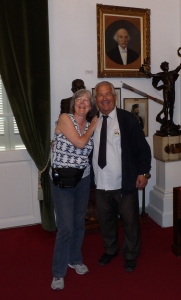 We enjoyed a private tour resulting in loads of photos to digest at leisure. My new hero, Dimitris has worked at the museum for thirty years, his passion tangible.

I’d previously seen some of the key exhibits and paintings via the internet, you’ll not find me complaining about Wikipedia! However, most value came from paintings, and memorabilia not seen unless you visit the museum. A glass cabinet containing the silver chalice used for the last communion had me entranced, shame the rebounding camera flash rendered the photo useless…but I saw it and it’s lodged for later use.

A renowned dandy, Byron (below left) loved to dress up in different uniforms and his portrait painter was a permanent member of his entourage.  My favourite portrait (below right) was of leader of the Souliot force, General Nótis Bótsaris.

The most valuable insights came from paintings showing the city’s topography. Over 9,000 people were besieged in Missolonghi. My original thoughts that they’d all be crammed together changed once I saw these paintings. The area behind the walls was free of houses, a big clue to how the residents managed to survive nightly bombardment.

I’d previously read about an attack by 2, 000 Ottoman troops against the off shore island of Klisova, on 6 April 1826. Now I’ve seen the museum’s painting of the attack and read the information provided I’ll certainly include the grisly episode in my novel.

Just a few days later, on the eve of Palm Sunday, the Christians realised they had to break out, come what may. 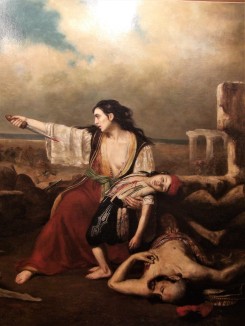 Photo of a painting in Messolonghi museum 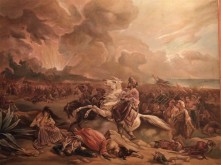 Photo of a painting in Messolonghi museum

On a more lighthearted note, here are some photos taken at our guide’s insistence:

When Dimitris unfurled these flags with a flourish he announced, ‘The flag of Spetses.’ I earned another brownie point when I replied, ‘Ah, home of Bouboulina.’ As a remarkable shipping captain Bouboulina ferried goods and arms across the Mediterranean to support rebels. She has a cameo appearance in Kritsotopoula, Girl of Kritsa and she’ll pop up in book two.

Thank you for your hospitality Dimitris, I’m indebted to you.

Come back next week for the scenic journey to Delphi, with hidden gems on the way.

Follow Kritsa, at the heart of it all on WordPress.com
Join 959 other subscribers